Stalwart defender Brian Malone has announced his decision to retire from inter-county football rather than rejoining Shane Roche’s squad after helping his club Shelmaliers to the recent provincial club semi-final.

Brian (35) has thus brought an end to an inter-county career which began in 2006 and which concluded with what will now stand as his last appearance for Wexford in the 2021 provincial championship tie against Dublin in Chadwicks Wexford Park last July. 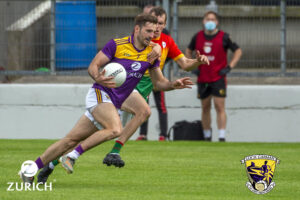 The former team captain was one of Wexford’s most consistent and dedicated performers during each one of those 16 seasons, during which he made more than 170 competitive appearances for the Purple and Gold between league and championship.

Two of his biggest days were the 2008 All-Ireland semi-final against Tyrone, and the 2011 Leinster Final against a Dublin side who were just setting out on their incredible run of success. Wexford went agonisingly close to causing an upset that day, losing out by three points. No other side has come closer than three points to Dublin in a Leinster Final since then.

Brian, who has won two county senior football titles (2018 and 2021) and two senior hurling titles (2014 and 2020) with his club, is thanked by all in the Wexford GAA community for his service over the years, and is wished well for the rest of his playing days with Shelmaliers.

Michéal Martin, Cathaoirleach CLG Loch Garman, paid tribute to Brian for his sterling dedication to the cause.

‘Brian was one of the most devoted players you could ever ask for, and gave his all every time he lined out. To commit to the inter-county scene for 16 seasons shows absolutely huge dedication, and on behalf of all in Wexford GAA, I thank him and wish him all the best for the future,’ he said.