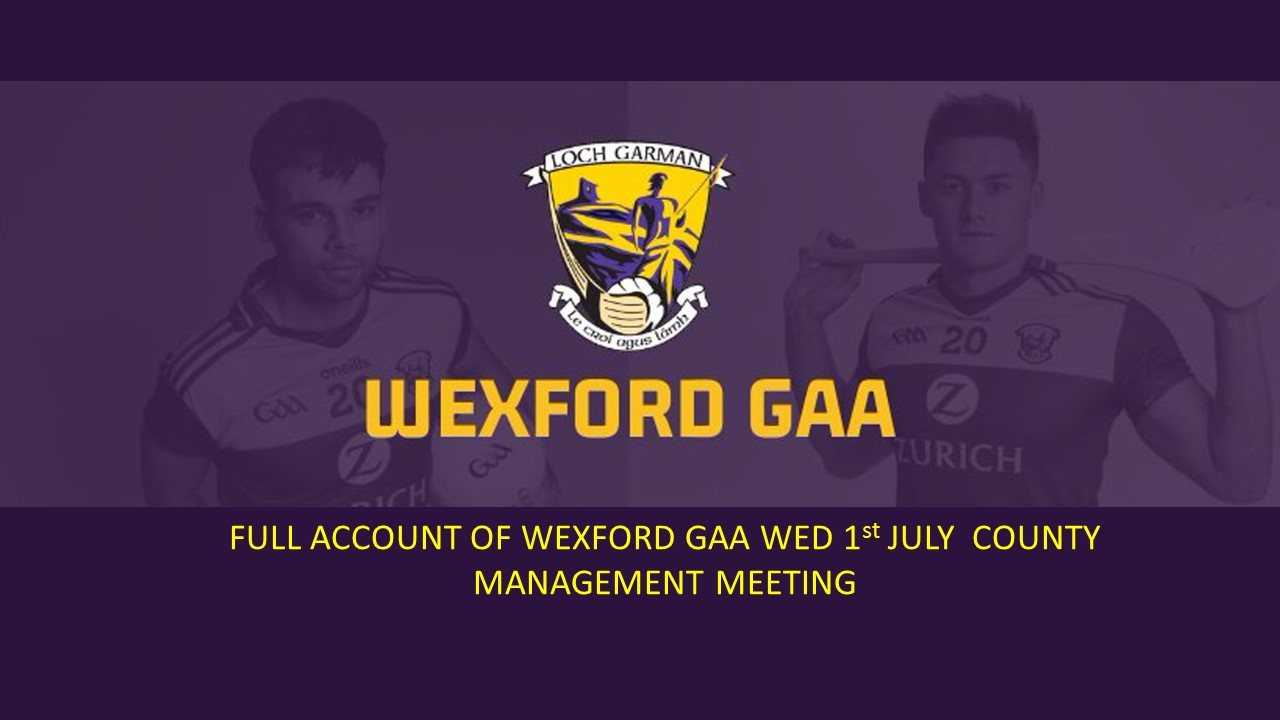 The meeting was convened at short notice to consider the fixtures proposal that CCCC had finalised on Monday 29 June. It is proposed that hurling fixtures will begin on Friday 17 July for all grades down to and including Junior A. This earlier start will mean no midweek matches will be required at these grades. The draft master fixture plan foresees hurling quarter finals to take place on the weekend of 7-9 August after 3 successive weekends of group phase games. In each 3-team group, the first weekend’s matches will be between teams 1 and 3, the second weekend’s games will be teams 1 v 2 and the third weekend will have teams 2 v 3.

Semi-finals are due to take place on 14-16 August with the finals to take place on 21 – 23 August. It was agreed that all knockout matches will finish on the day using extra-time and penalties thereafter. County finals, however, will proceed to a midweek replay if they finish level after extra-time.

The schedule for knockout matches after the quarter-finals could be impacted by any change to the national rules on attendance at outdoor events. If there is an increase in the numbers allowed to attend matches it might be necessary to defer semi-finals and finals until such time as increased capacity is allowed. In that case, the group stages of the football championships could take place before the hurling semi-finals.

The St. Martin’s v. Oulart-The Ballagh fixture on 17 July will be televised live by TG4 and it was noted that the broadcaster had prematurely issued a tweet to that effect earlier in the day without the overall schedule having been formally signed off by Coiste Bainistíochta or the participating clubs being notified. The tweet was deleted as soon as it was noticed and it was clarified that provisional fixtures had been communicated to TG4 to assist with their planning but it had never been intended to publicise any matches until the schedule was approved and notified to Clubs.

Nonetheless, it is a very positive development to have the Wexford senior hurling championship featured as the first live club match to be broadcast in 2020 and it reflects well on the interest in our games.

The football championship is scheduled to commence on the weekend of 21-23 August and it will follow the same format as hurling. However, any teams participating that weekend in hurling finals will be scheduled to play their group matches on football weekends 2 and 3. The county football finals are scheduled to take place on 25-27 September.

Overall, the Wexford championships will take 10 weeks to play and it is hoped that Covid-19 rates remain low in the county and there is no disruption to the calendar. Public health is the priority, however, and it is recognised that a positive diagnosis within a team currently means 14 days’ self-isolation for the full team. It is essential therefore that all players and GAA members continue to adhere strictly to the public health guidance and to avoid higher risk situations. Further Covid-19 guidance is anticipated from Croke Park early next week and this will be carefully examined and communicated to clubs.

Publication of district fixtures are expected shortly, and all districts will be expected to conclude their competitions by 4 October. Protocols around all fixtures and attendance will be issued to clubs in advance of the fixtures.

The current Health Act Regulations stipulate a 200 person limit on attendance at outdoor events until 20 July and, thereafter, a limit of 500 persons. The implementation details of such limits require further clarification, including whether it applies to a whole venue or to individual sectors that can be clearly cordoned off and full information will be issued to clubs by Friday July 10th.

There are over 800 season ticket holders to consider also so it is hoped that some flexibility will be shown by national authorities in terms of attendance numbers. Whatever emerges in the coming fortnight it is clear that the first weekend’s matches will be all ticket events and that the previously proposed “weekend pass” ticket will not be feasible unless there is a significant increase in permitted capacity. Again, season ticket holders will contacted once full information has been finalised by Friday July 10th.

It is hoped to stream at least two live matches every weekend, with a small access fee applying. It was noted that it is not permitted to livestream matches at the same time as any televised live GAA match. The details of live-streaming will be finalised at the next Coiste Bainistíochta meeting on 8th July and details will be circulated following this meeting.

Wexford hurlers are due to play Galway in the Leinster semi-final on 31 October or 1 November and it is hoped that this might be scheduled for the Saturday to facilitate attendance at the football game the following day. Our minor hurlers are due to play Kilkenny this weekend in the Leinster semi-final. It was noted that if our senior hurlers qualify for the Leinster Final it is scheduled for 14 / 15 November; if we lose to Galway we would be back in qualifiers action one week later.

The Under 20 hurlers are scheduled to play a Leinster semi-final on 7 / 8 November against whoever emerges from games between Antrim / Down / Dublin / Offaly / Westmeath.

Detailed regulations on match protocols, attendances etc in the context of Covid-19 will issue to clubs as soon as possible before fixtures commence. This will be informed by the further guidance expected from Croke Park.

It was noted also that the deviation whereby free grading applies to 18 year olds is in place again for this season. Such players can move between a club’s teams in the group phase but if they play for a club’s 1st team they can only “play down” to the 2nd team (and not the 3rd or 4th teams). From the quarter-final phase on, 18 year olds will no longer have free grading.

There is no restriction on the number of matches in the group phase that an 18 year-old can play in a given week.

Over 3600 children have already registered online for 2020 camps and it is expected that up to another 1000 will register before camps start. It was noted that bookings must happen online, in advance of the camp, and that no cash will be accepted on the day of the camp.

It is expected that tickets will be available to clubs from 27 July. Tickets will also be purchasable online via the Wexford GAA website and purchasers will be able to select the Club they wish to associate with the purchase (reports will be available to clubs on the number of online sales registered to them). The first draw will take place at the end of September and draws 2 and 3 will take place together at the end of October.

Clonee It was noted that Clonee has responded to the recent correspondence and has committed to paying all affiliation fees owing by October.

It was noted that the deadline for the payment by clubs of their property and liability insurance contribution, plus any outstanding fines etc., is Friday 3 July 3. More than half of clubs have already paid their contributions.

It was noted that the 2020 budget has been severely impacted by the Covid-19 crisis but it is nonetheless expected that Wexford GAA will achieve a financial surplus at the end of the financial year, albeit significantly smaller than that which had been budgeted for at the outset. It is a credit to the clubs, staff, sponsors and supporters that the county is in a healthy financial situation in this most difficult of times.

The Chadwicks Wexford Park pitch surface is in excellent condition but it was accepted that it could come under pressure, depending on the schedule in the coming months, and that only full remedial work will properly address the grass quality and pitch integrity.

A planning permission application for the additional pitches development at the Centre of Excellence has been submitted now to Wexford County Council.

Congratulations was extended to Ger Carthy of Our Lady’s Island GAA on his recent election as Cathaoirleach of Wexford County Council.