U20 Football: Anto Russell was ratified as U20 Football Manager with his backroom team to be confirmed in the coming days.

An Cathaoirleach stated that he has met with the Ard Stiúrthóir, Tom Ryan, and Director of Games, Shane Flanagan, to outline our significant concerns to the new proposed funding model. It was outlined that the model for allocating funds does not factor dual players and dual affiliated clubs into the allocation model. The vast majority of affiliations within Wexford are affiliations to a single club with approximately 98% dual players across the county. Delegates unanimously agreed that Wexford GAA should take the necessary actions to ensure an equity of funding.

Review of Gaelic Football in Wexford

It was noted that only 26 of our 49 clubs completed the football review survey. Philip Wallace is currently reviewing this data and it is planned that Philip will report his findings at the next County Committee meeting.

An Cathaoirleach commended the response of all clubs to the recent “Respect the Ref” workshops.  All clubs held workshops within the requested timeframe with 1,124 attendees. There were 53 different actions, that clubs committed to take in respect of the conduct of their players, mentors, parents and supporters towards match officials. 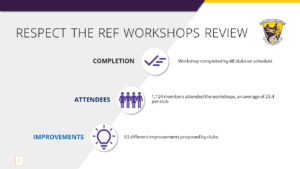 Across the various stakeholder groups, the main actions that clubs proposed to undertake were:

Wexford GAA has commenced a research project with Dr. Daniel Regan, a senior research fellow in UCD. The goal of the Safety, Order & Respect of Referees Trial (SORRTit) is to completely reduce the highest categories of physical and verbal abuse. This requires a culture, ethos and process reset. Dr. Regan’s work focuses on optimising measurement of people’s behaviours and combining this with behavioural interventions to generate change.

There will be a follow up meeting with all referees on Tuesday, 15 November 2022.

The GAA’s Age Grades Task Force has come back with recommendations in respect of age grades at both intercounty and club level.

Within our own county – a debate which involves the vast majority of players – club priorities should be:

It was agreed that Wexford GAA will bring a motion to convention to go with U18/U16/U14/U12, in 2023 and decouple from adult championship at U18 (i.e. U18s would not be allowed to participate in adult championship).

Work on the groundworks for the floodlights is due to commence on 27 October 2022 with the floodlights expected to be erected in early December. The first game under floodlights in Chadwicks Wexford Park will be a Walsh Cup game on 21 January 2023 and will include a host of significant events to mark the occasion.

Work has commenced in respect of the new pitches in Halo Tiles COE. This work will continue across the winter subject to rainfall and ground conditions.

All clubs are reminded that the deadline for proposals in respect of club championships structure and format must be submitted to [email protected] by Friday, 28 October 2022. Proposals will be reviewed and the Executive will engage with clubs to merge proposals that are similar. They will be then distributed to clubs for discussion with final decision to be made at the County Committee meeting on Tuesday, 22 November 2022. 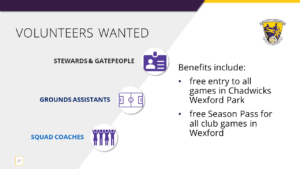 Volunteer stewards, gatepeople, grounds assistants (for pitch repair at half time and after games) and development squad coaches are currently sought. Anyone interested in these roles should apply by email to [email protected]. Benefits to volunteers include entry to all games in Chadwicks Wexford Park (as part of the role) and a Club Season Pass for all club games in Wexford.