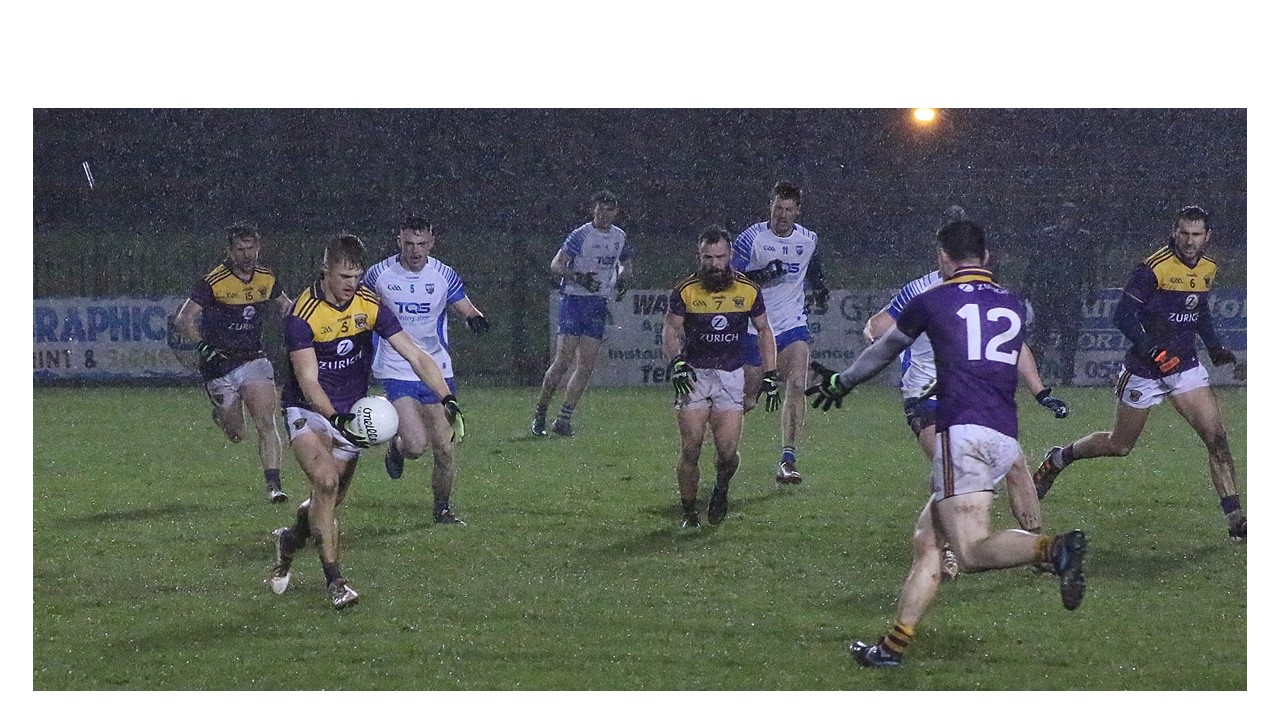 by Ronan Fagan at Fraher Field

Goals from Ben Brosnan and Niall Hughes edged Paul Galvin’s Wexford to the derby spoils against Waterford in Division 4 of the Allianz NFL at a weather-battered Fraher Field, Dungarvan on Saturday night.

Wexford were down to 12 men at one stage of the second-half through sin-binnings as they fought to withstand a determined second-half charge from their hosts, and the visitors ultimately survived to embrace back-to-back victories.

Waterford remain pointless meanwhile as Wexford extract their first success over the Deise in three attempts, having lost an All-Ireland championship Qualifier in 2018 and last year’s league meeting.

Driving wind and rain made for trying conditions, and after the neighbours shared the opening four points, Wexford full-forward Ben Brosnan inflicted the first major incision, when racing in from the right to unleash a bullet to the far corner of the net in the eleventh-minute after a sublime pass from Glen Malone (1-2 to 0-2).

Brosnan was denied a second goal by a combination of ‘keeper Paudie Hunt and a post while gale-assisted Waterford regained parity on 0-5 to 1-2 after 29 minutes courtesy of Jason Curry (free), Jason Gleeson and Conor Murray.

Niall Hughes quickly pointed Wexford back in front before they were further boosted when Waterford’s Corey Kennedy was sin-binned, and the visitors held strong for a 1-3 to 0-5 half-time lead.

Wexford stung their hosts with what proved the decisive second goal within a minute of the re-start when Niall Hughes arced a shot over the stranded ‘keeper.

But Wexford were on the back-foot for much of the remainder as Waterford monopolised attacking play, and they almost snatched back a goal when full-forward Brian Lynch forced what proved a fruitless ’45.

Wexford suffered the temporary loss of Ben Brosnan to a sin-binning, but they refused to lose the initiative.

In fact, amid ever deteriorating conditions, it wasn’t until the 57th-minute that the second score of the half arrived as Darragh Corcoran kept Waterford in the fight (2-3 to 0-6).

Wexford’s resolve was further tested when both Gavin Sheehan and Niall Hughes were sin-binned just before Brosnan’s ten-minute exclusion ended.

But Waterford were unrelenting, and Jason Curry (free) got them within the minimum before Wexford ultimately held out as captain Brian Malone celebrated his 164th appearance.