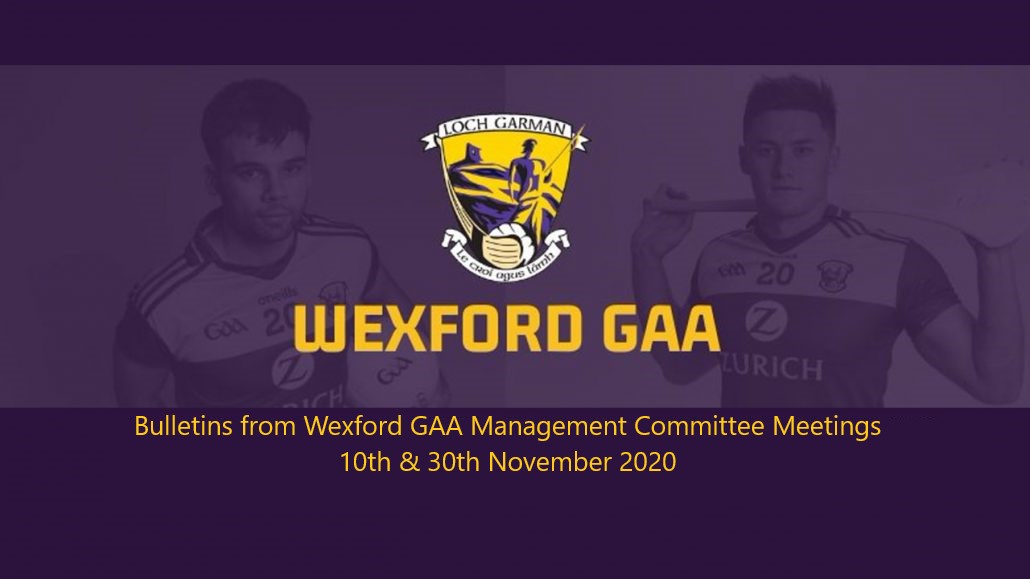 Correspondence was received from Monagear-Boolavogue with regard to the Wexford People coverage on post county final celebrations which the club felt damaged the club’s reputation.

Monagear-Boolavogue requested that that it would be noted that the club had at no stage had any case of COVID-19 amongst players or club members and that all HSE guidelines were followed at all times for post-match meal following the final.

A request for short term bank loan/overdraft facility for approval from St.Mary’s Rosslare was granted to facilitate development of a walkway at the club.

A request for loan approval from Davidstown-Courtnacuddy was approved in principle pending full documentation.

A vote of sympathy was passed to the Stafford family and the Naomh Éanna club on the recent passing of Sean Stafford former president of Wexford GAA.

Nominations were confirmed as follows:

It was agreed that the Management Committee would proposed that delegates for Leinster Convention and Annual Congress would be selected from the management committee for 2021 and going forward as in the past number of years, elections were held in the past but in most years some Delegates were unavailable, also certain workshops are held for the different roles and it is best practice for the person occupying that role to attend.

Motions were proposed from Management Committee and received from a number of clubs and were discussed. An Runai will seek clarifications in relation to a number of the motions arising from the discussions and will update at the next meeting.

The following terms were agreed for sale on the 2021 Wexford GAA Club Card:

€90 presale for 2020 Club Card Holders from Wednesday 13th November to Wednesday 25th November. Current holders can still avail of the discount beyond this date, however if a club has reached its limit it will not be possible to purchase. (first come, first served and limited to one ticket per person)

**in the event of attendances of greater than 1,000 people being allowed at fixtures, Club Card holders will receive priority access to all Wexford GAA Adult Club fixtures.

It was not possible to bundle the Club Card with the Cairde Membership this year due to the limited supply of Club Cards.

A number of gift ideas were proposed for sale via the website to compliment the Club Card and Caride Membership offerings. The Cathaoirleach suggested the incoming chairperson and the Runai finalise proposals for the next meeting.

It was agreed to deposit €500,000 with the Croke Park Development fund for future developments. Fortunately, Wexford GAA is in a strong financial position and this money will be need with the planned developments to Ferns COE and Chadwick’s Wexford Park in the years ahead. It was agreed drawdown of this money in the future would require a minuted decision of the Management Committee.

The National GAA COVID Committee are meeting this evening and an update will be circulated to all clubs following the circulation of revised recommendations.

It is envisaged the meeting will be held via Microsoft Teams and it was agreed by Management that club delegations would be limited to the following:

1,The County Board Rep.

2.The Chairperson or Secretary.

The votes for the election of vice-chair will be counted at 5pm on Monday by tellers Eamonn Hore and Dave Ormonde and the result will be advised during convention.

Motions as circulated to clubs earlier that day were discussed. The Runai proposed that a document explaining the reasoning for each motion would be circulated in advance of the meeting to the registered attendees.

Concerns were expressed in relation to the motions from St.Martins, St.Josephs and Oulart the Ballagh and these will be highlighted in the explaining document.

The accounts were approved at a meeting earlier this afternoon at a meeting with auditors Martin and Ruairi Quigley and have been subsequently also circulated to the Management Committee and clubs. A net surplus of €507,228 was achieved in 2020 following on from the surplus of €369,422 for 2019. Overall Wexford GAA is in a strong financial position as €220,000 is still due to be drawn down from Sports Capital Grants in relation to Ferns COE. €500,000 has recently been lodged on deposit in Croke Park to go towards planned Development works in Ferns COE and Chadwicks Wexford Park and a further lodgement will be made in the next month. The Cathaoirleach paid tribute to the Treasurer Andrew Nolan and the Finance Committee for such a healthy surplus. Andrew gave an overview of the figures which will also be done at Convention.

A number of the members of the committee noted the huge credit that is also due to the chairman for the turnaround in the financial position during his tenure.

The officer reports have also been circulated to all clubs. An Cathaoirleach thanked all volunteers on the various sub committees for their assistance during his tenure and thanked the secretary’s and officers for their reports.

Dave Tobin advised that further information has been requested in relation to the planning application for Ferns COE. A reply will be drafted addressing every issue raised.

Similarly, a request for further information in relation to application for Chadwicks Wexford Park is also being worked on.

Cairde Loch Garman Supporters Club Memberships for 2021 will go on sale next week and there will be no change in membership price for 2021. The funding raised by memberships is crucial for development of both facilities and our coaching structures and it is important to note that access to tickets when available is a reward for those who support these initiatives.

The Cathaoirleach proposed that at convention Mick Kinsella’s term as president would be proposed to be extended for 2021.

A decision regarding the minor and u20 Hurling Championship semi-finals is expected before Wednesday.

The Wexford GAA Yearbook will be launched prior to Convention on Monday and will be available for €18 from the following shops:

Featuring contributions from all clubs and covering our club championships across all codes and the fortunes of our Inter-County teams during a historic 2020 season taking place in the midst of a pandemic.

Clubs are required to purchase 10 copies of the Yearbook at a reduced rate of €15 and these copies will be available for collection from the office in Chadwicks Wexford Park from Wednesday 9th December.

Dominic Williams working on a new edition of his Wexford GAA bible and as the last version was supported by the supporter’s clubs he has applied for funding to Wexford GAA. A contribution of €5,000 was approved.