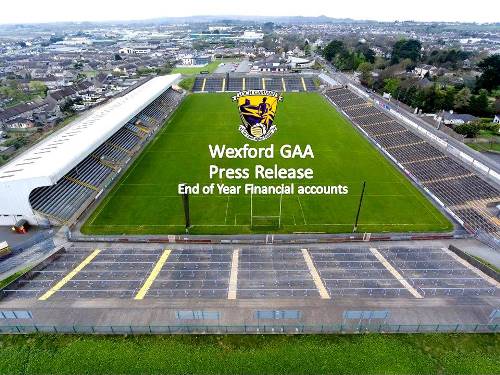 Wexford GAA are delighted to announce that the end of year accounts to be presented to next Monday’s County Convention will show an operating surplus of €182,380.

In what has been a hugely positive year on the field for our club and county teams, the restructuring off the field is also continuing at pace.

On the income side, there is a huge increase of €447,135, from €2,578,981 in 2016 to €3,026,116 this year. A concerted effort to improve commercial income and fundraising activities saw a combined increase of €150,000. A task force chaired by Micheál Mahon (HWH Bunclody) and including Adrian Fenlon (Rapparees-Starlights, Seán Doyle (Buffers Alley) and Anthony Neville (St John’s Volunteers) will make a presentation to convention on how there is potential for further growth in this area.

Income from local gate receipts shows a small increase, while the success of the senior hurling team in 2017 saw an increased national league dividend of €75,000. Over five and half thousand children attended summer camps in the county in 2017 highlighting the continuing growth of underage activity in the county. This saw income increase from €275,499 to €314,822

The financial picture is especially positive given the increase in expenditure in a number of areas.

The spend on inter-county teams was €945,224. In previous years this was €695,891 in 2016 and €806,866 in 2015. The improved mileage rate for players in 2017 contributed to part of this increase. There were also additional high profile games in 2017 with our senior hurlers reaching the NHL semi-final and Leinster final and senior footballers reaching the NFL final.

Wexford GAA continue their investment in Coaching and Games Development with an increase in expenditure to €495,456 from €457,000. As recently announced Wexford GAA with the support of Croke Park, Leinster GAA and Wexford County Council have established a targeted initiative to boost participation in urban areas. While the recruitment of Willie Cleary (Hurling) and Anthony Masterson (Gaelic Football) have contributed to the development of specific plans to raise standards in both codes.