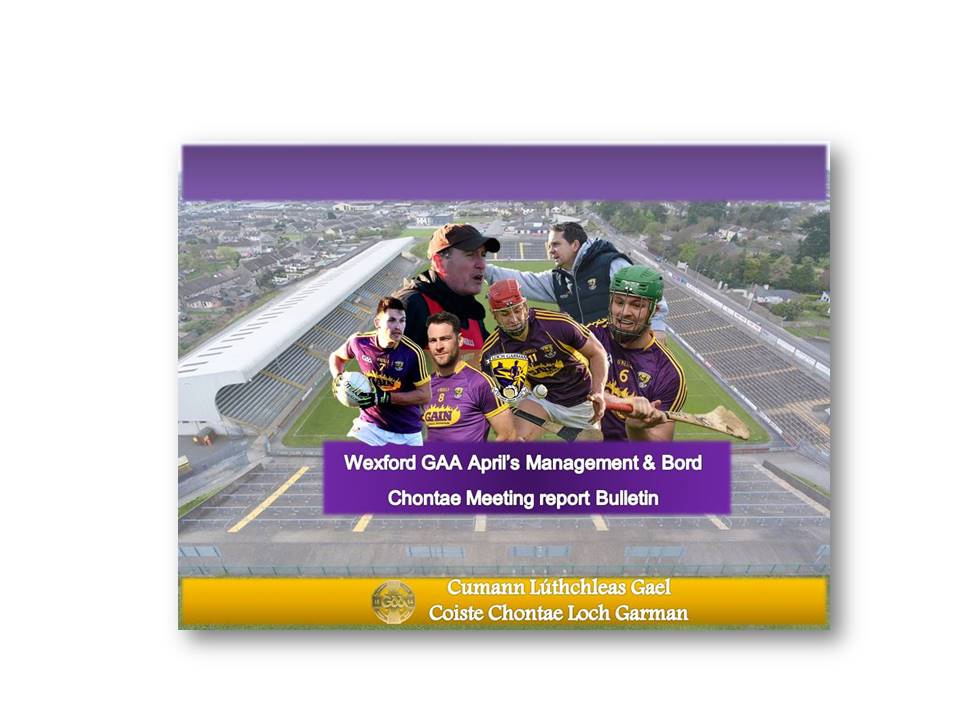 A request from Davidstown-Courtnacuddy for permission to hold a nationwide fundraising draw was approved. Also approved were a number of transfer requests. It was agree that financial support (€150 each) should be given to the Bannow-Ballymitty and St Mary’s Rosslare Scór teams competing in, respectively, the junior and senior Scór All Ireland finals in Sligo.

The County PRO has established a committee and the Chairman suggested that a specific PR budget could be created from programme sales surpluses. On big match days, programmes could be sold by walking vendors with the proceeds divided between the PR committee and the county board and a donation being made to the unit of the association (for instance, a development squad) that provides the vendors.

This is up for review at Leinster Council in the context of tight fixtures calendars and options on the table will include a straight knock-out competition or commencing the tournaments before Christmas. It was agreed that the competitiveness of the tournaments is an important consideration and this should be factored into discussions.

The poor weather has wreaked havoc on the fixtures schedule and, at the moment, more than 20 matches are outstanding. The huge effort put in by Seamus at the Halo Tiles Centre of Excellence to enable so many football matches to take place was recognised.

Cairde Loch Garman had its publicity launch in Innovate Wexford Park immediately before the meeting and it’s hoped that it will be a big support to commercial activities too. Immediate priorities are to get as many tables as possible for the Wexford GAA tent at Punchestown on Saturday 28 April. Thereafter, the Golf Classic will take place on 4 May in Bunclody; 35 teams are currently booked in and the ambition is to get near to 50.

The national hurling league semi-final against Kilkenny in Innovate Wexford Park had highlighted a number of areas that will need to be addressed before the championship matches. As previously identified, more steward volunteers are needed and this will have to be addressed before 20 May. Bathroom facilities on the open stand side will also require investment to bring them up to an acceptable standard.

Noel Holohan is chairing a group to organise events to mark the 100 year anniversary of Wexford’s 4 in a row football team. It’s expected to be an excellent programme of events, centred around our home championship football match against Laois on 12 May, and it is hoped that a large crowd of Wexford GAA fans will attend.

It was agreed that it would be useful to have a discussion about potential naming of stands / terraces in Innovate Wexford Park. While this might be a longer-term issue, it is important that a considered and strategic approach be taken. Another longer-term issue to be examined in due course is the club structures in Wexford Town, taking account of demographics and population growth in the town. Now that we have a specific developmental focus on reversing the decline in games’ participation in our urban areas it is important that our structures are fit for purpose. Such a review would take time and would benefit from independent facilitation but a strategic approach to any such review should be carefully teased out.

The Chairman thanked the Buffers Alley club for the generous use of their fine premises and said that he hoped that other county board meetings could be held in club venues over time. Clubs, and their delegates, are what make the county board and it’s important to recognise that publicly he said.

It was noted that Model County Draw tickets sales have gone very well and are likely to be up on 2017.
Cairdre Loch Garman had its first meeting on Monday 23 April and a number of interim officer appointments were made pending finalisation of a Constitution for Cairde. Éanna Martin, the new commercial manager, is the interim Chairman of Cairde, Marion Doyle is the interim Secretary and Andrew Nolan, county treasurer, is the Cairde treasurer also.

Online sales of Cairde membership, at €25 each, have gone quite well and will be boosted in the weeks ahead as championship matches approach. Members of the former supporters club who have already paid a subscription for 2018 will deemed to be full Cairde members; all former supporters club members will be written to, the Cairde model will be explained to them and they will be asked, in due course, to sign up to Cairde and to adjust standing orders as necessary. Membership of Cairde will guarantee advance access to purchase 2 tickets for championship matches involving Wexford and it is intended to promote this more extensively in the coming weeks.
The Wexford GAA website will include a dedicated Cairde page which will include information on Cairde activities, membership details, information on partner retailers etc. It is hoped to submit a Cairde Constitution for approval to the next meeting of the County Board.

The CCC is proposing to use the bank holiday weekend of 2-3 June, which had originally been designated as a free weekend, to catch up on All County league games and it is seeking the approval of the County Board to that end. The meeting agreed to this in principle, provided that clubs had flexibility to respond to CCC (given that players may have booked holidays) and to finalise between themselves when precisely the games would be played.
Financial Report

John Kenny presented an analysis of the county board accounts for the six months up to the end of March and explained that he had been assisted in this by Liam Wall, Barry Cleary and John Fenlon. Around €330,000 in income has come in during this period while expenditure has been around €560,000. This is in line with expectations as the bulk of expenditure occurs earlier in the year while more of the income comes in in the latter half. The Chairman thanked the group for their work and noted that these are effectively “live” accounts that give an accurate and immediate snapshot of financial activity. This level of financial transparency gives the clubs key information to inform decision-making at county board level and was something that he committed to on taking office in 2017.
Coaching and Games

Micheál Martin gave an overview of our current Games Development Structure and the plan A 2020 Vision for Wexford GAA which was drafted in 2017.Wexford now employs 4 Games Promotion Officers, a doubling of the number in a year that has been facilitated by funding from Croke Park, the Leinster Council and from the benefitting clubs themselves. Faythe Harriers said that they have had very positive feedback on this scheme, as it has brought new ideas and energy into their club. They also pointed out that their GPO (who is shared with Rapparees in Enniscorthy) is benefitting hurling more widely in Wexford Town as he is coaching over 200 schoolchildren aged between 5-9 that are not yet involved in any club.

There has been a near tripling in Hurling 365 numbers since September, with a new school coming on board every week, due to the work being done by Willie Cleary (in conjunction with clubs and schools) which has been facilitated by a targeted private funding donation.
It was noted that there’s an ongoing review of squads with a big focus on standards in 2018. There has been a welcome increase in the number of former players getting involved with squads across both codes. It is likely that around €500,000 will be spent again in 2018 on coaching and games development but it’s important that we achieve the greatest benefit and impact from that spend.
Fixtures

The incredibly bad weather of recent weeks has made fixtures setting very difficult since March. The following facts were outlined regarding Wexford’s adhering to the designation of April as “club month”:

While there was general recognition of the scale of the challenges faced this year in setting fixtures in April, Ballyhogue raised concerns about the late-notice cancellation of one of its fixtures, particularly with some players travelling to play. The Chairman explained that this was due to the logistics of pitch availability in Ferns, when most other grounds were unplayable, which meant that one fixture had to be pulled at short notice with ground conditions dictating the outcome. It was acknowledged that there had been significant disruption to the schedule and clubs were thanked for their cooperation. It was agreed that the completion of three rounds of championship was a significant achievement given the unprecedented weather this year.

The Chairman explained that a working group, chaired by Noel Holohan, has put together an excellent programme of events to commemorate the 100-year anniversary of the Wexford football four in a row team.

The events will pivot around our football championship match at home to Laois on 12 May (with our minor hurlers playing at 4.30pm). Tom Ryan, the new Ard-Stiúrthóir CLG, has been invited to unveil a plaque to the four in a row team before the senior game which throws in at 6.30pm. On the field of play, Wexford will wear a long sleeved replica jersey very similar in design to that worn in 1918. An example of the jersey will be on display at the championship launch event in Dublin on 1 May.

All clubs will be written to, seeking information on descendants of the team who could be specifically invited to the match. A commemorative programme, sponsored by DBA Publications, will be available on the day and specific signage will be erected in all four districts to help build awareness of this event.
Other business

Bunclody raised concerns that a number of clubs are still not supplying correct team numbering for match programmes, or sticking with those supplied. It was agreed that Clubs would be written to in this regard and that the topic, plus that of passes, would be put on the Clár for the next meeting.

The Children’s Officer updated clubs on the club risk assessment process and said that just 3 clubs’ risk assessments were awaited. He is hopeful that this process will be tidied up shortly and that the 2019 process will commence in Autumn 2018 to give clubs more time.