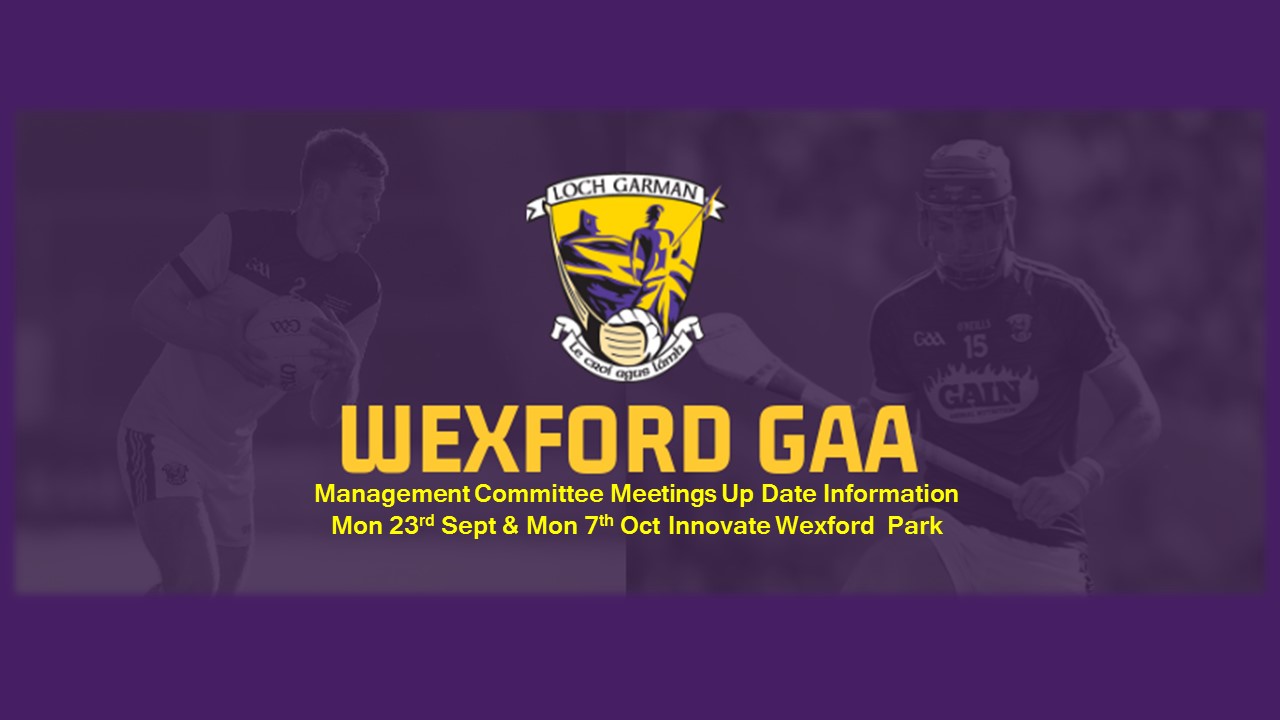 It was proposed and agreed that the senior football cup and the Intermediate A cup will be replaced. The Cathaoirleach will liaise with a number of families in this regard and it was suggested that a time limit be associated with trophy naming to reflect both the passage of time and the fact that trophies have a physical lifespan (a suggested timeframe of ten years).

Leinster Council has recently discussed the format for the 2020 minor championships and has voted to maintain the current structure for football. No decision has yet been taken with regard to hurling although there is some support for the Wexford proposal for a knockout championship to help to create more time in the calendar for club minor championships.

The Cathaoirleach noted that there is already significant interest in managerial positions over our minor and Under 20 teams but he proposed that no appointment would be made until   later this year. This should ensure that there is not an excessively lengthy lead-in preparation time for the squads, particularly given that the Under 20 county hurling championship is not concluded and the football competition has not commenced.

At present, around 12 counties have not yet moved their minor competitions to Under 17 but Croke Park have confirmed that this will be mandatory from 2020 onwards. It was noted in this regard that there is some support at national level to restrict intercounty competitions to age grades from Under 19 up and it is likely that this will be the focus of discussion in the months ahead.

An intercounty player’s pass for access to Allianz national league matches had been retained at the gate at a recent club fixture in Wexford. The pass (not from Wexford) will be returned to the player in question with a reminder that its period of validity has expired and it cannot be used for club fixtures.

The most recent County Board meeting had delegated authority to the management committee to engage directly with Askamore-Kilrush regarding their development plans. The club has submitted a financial plan which requires further amendment and the Cathaoirleach will meet with the club to discuss.

A request has been received for permission to live-stream the Ferns vs St. Martin’s senior hurling championship game on Saturday 12 October. The potential implications for gate receipts and live attendance were discussed and it was agreed that while no live-stream may take place permission would be given to broadcast deferred coverage of the match, in line with the decision of the previous meeting regarding semi-finals and finals.

Former Uachtarán Liam O’Neill has concluded his examination of the GAA landscape in Wexford Town and the report will be circulated in the first instance to management for views.

A quotation has been received for works at St. Patrick’s Park but it is very high and alternative quotes will be sought. It was also noted that a reliable operator for the scoreboard in St. Patrick’s Park has not yet been identified. The reseeding of the goalmouths at the Centre of Excellence has gone well and it is hoped to sand all the pitches soon.

Report of sub-committee into a complaint

The sub-committee convened to investigate complaints from a club arising from two fixtures. The report of the sub-committee was approved and a meeting will be arranged with the club concerned to outline the findings and recommendations.

A further new GPO, Geraldine Curtis, has been appointed and she will service 3 clubs; this now brings the number of GPOs to nine, with 24 clubs using their services. Provisional agreement has been secured from Leinster Council for another GPO who has been earmarked for 3 further clubs. There is a waiting list of clubs looking for GPOs and it is likely to be early 2020 before people are recruited to meet this demand.

The Cathaoirleach provided an update on the new sponsorship deal with Zurich which will take effect from 2020 and which represents a significant increase in funding for Wexford GAA. He also advised that the naming rights for Wexford Park are currently up for negotiation.

The senior hurling squad is organising a holiday directly after the Super 11s Hurling Classic in New York. The squad will remain in the US for the holiday and are organising a series of fundraisers to cover the costs. These will include a formal ball in Wexford at Christmas, a “behind the scenes” DVD and a calendar. It was agreed that Wexford GAA should make a donation of €10,000 to the holiday fund in recognition of the achievements by the team in 2019.

Issues around refereeing are a recurring theme emerging from the current strategic plan public consultation process. A number of initiatives are already underway such as the strict enforcement of sideline discipline by team officials and far more rigorous reporting of infractions. It is intended to shortly introduce external assessors for refereeing training and exams and further actions on foot of the 2018 refereeing review report will be considered in due course.

Potential designs for a new jersey for our teams in 2020 will be considered at the next meeting and it is likely that there will be significant news regarding sponsorship in the coming days, It is also anticipated that discussions with Davy Fitzgerald regarding the senior hurling manager position will be concluded this week.

It was noted that Kilrush-Askamore are proceeding with fundraising to support their possible development opportunity and it was agreed that they would be invited to a future management meeting and asked to submit a draft plan in advance.

Strict enforcement of sideline discipline match regulations is to be applied from semi-finals onwards and any team officials found in breach will be sent to the stand and will therefore miss the final.

The issue of a memorial / reflection area in Innovate Wexford Park remains on the agenda but will be looked at more concretely in a couple of months’ time.

The forthcoming Special Congress will discuss proposals for a 2nd tier football championship; it was agreed that the proposals will be sent to clubs for feedback via email by 14 October. It was noted that Leinster Council is discussing its own competition structures at present and that it is proposed to give provincial winners a bye directly to the semi-final. It was considered that these proposals are somewhat ad hoc given that a national fixtures review committee is still working and it was agreed that no province-specific changes are needed at this moment.

It is likely that Under 20 football will revert to straight knockout format, commencing in February / March.

A difficulty with the new minor grade was that clubs’ Under 17 games couldn’t take place from 23 April to end July; this is not satisfactory and needs to be addressed. A better mix should be achieved between club and county fixtures. It was also agreed that the focus should not be solely on winning but on development of players and it was agreed that a Wexford proposal should be submitted to the Leinster Council.

A request for a bucket collection has been received from the handball association and it was noted that they are traditionally allocated the hurling semi-finals; this is their only chance to fundraise at Innovate Wexford Park and they should seek to optimise what they make on the day.

The Development Officer outlined the measures proposed to improve security at St. Patrick’s Park. It was also noted that Enniscorthy CBS wish to have access to the ground on Tuesday afternoons for training. Upgrading to some fencing is required at the Centre of Excellence; it was also noted that while the planning application for a new N11 entrance at the Centre is drafted this will not be submitted until the road has been formally downgraded.

A planning application for floodlighting in Innovate Wexford Park, plus dressing room upgrading and improved wheelchair access, will be prepared. While actions on foot of planning permission may take some time it would be prudent to secure the permission now. The ongoing difficulties with the pitch in Innovate Wexford Park will need to be definitively dealt with and this will be discussed in more detail at future meetings.

The current cup is in a poor condition and a couple of families have expressed interest in being associated with any new football cups. It was agreed that the families in question should be approached and that a decision would need to be taken as to who might sponsor a new cup in 2020.

It was agreed that donations should be made to the charities It’s Good to Talk and Wexford MarineWatch as a final element of our very successful Wellness Week. A sum of €500 will be donated to each charity.

Fixtures scheduling and issues with referees are the two dominant themes emerging from the responses to the survey; there was also very positive feedback on improvements in terms of coaching. A total of 280 responses have been received to date.

The GPO coaching scheme continues to grow and the challenge is to find quality coaches for the posts. It was noted that the annual financial contribution by clubs who are part of the scheme will be reviewed to ensure it is in line with that made in other counties.

The annual Coiste convention will take place on 28 November in the Ferrycarrig Hotel.

It was agreed that the successful Glynn-Barntown rounders teams would be introduced to the crowd at a match on the weekend of 19-20 October.

It was noted that a finalised Innovate Wexford Park car parking policy has been circulated to clubs.

Detailed consideration will need to be given to a policy on streaming / recording of matches. At present, Croke Park has directed that no livestreaming can take place at times when TG4 or RTE are live broadcasting. In the short term, due to the potential impact on attendance at matches, it was agreed that there will be no live streaming of matches from semi-finals onwards and that a full policy in this area will be drafted for 2020.