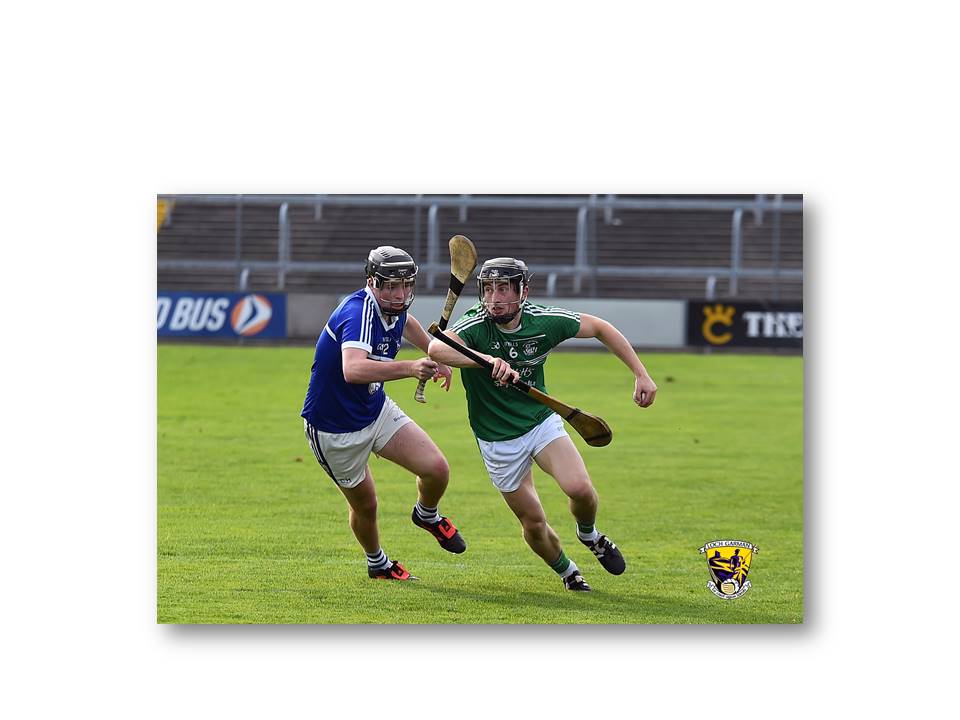 Naomh Éanna are through to their first-ever Wexford senior hurling championship final after bettering Oylegate-Glenbrien in an exhilarating second-half duel during Sunday’s opening Pettitt’s-sponsored semi-final at a sunny but blustery Innovate Wexford Park.

And Gorey did it against the odds after they lost the instrumental Cathal Dunbar in the 38th-minute to a red-card following an off-the-ball offence.

The fireworks were certainly spared during an underwhelming first-half before the game exploded into life, as a stirring second-half saw Seamus Casey complete his hat-trick to earn Oylegate the initiative by 4-7 to 2-11 only to be outstripped by Gorey’s strong late charge that was headlined by the clinching kicked goal from Conor McDonald.

Naomh Éanna had triumphed in last year’s quarter-final meeting by 3-13 to 1-12 before prevailing again (6-17 to 3-12) when the sides met in the group-stages this year as Oylegate rested a dozen main figures.

An open but low-scoring start to this latest rematch saw the sides twice level before Oylegate made the first breakthrough with a 19th-minute goal to lead for the first-time (1-3 to 0-3). A long clearance by Damien Reck got a slight touch in the air from Podge Doran on the edge-of-the-square to allow Seamus Casey nick in unguarded to finish to the town-end net.

But Gorey were ruing some poor finishing throughout the opening-half, and a pointed free from Pádraig Doyle on 25 minutes was their sole return out of a series of promising chances as they added four more wides in the closing stages, during which wing-back Eoin Conroy embarked upon an increasingly threatening dash up-field only to fire wide with an angled effort on the Clonard-end goal.

Thus Oylegate-Glenbrien broke surely content to be leading 1-4 to 0-4 after an underwhelming opening period.

And the leaders couldn’t have banked on a better start to the second-half, as Seamus Casey popped over a free from midfield before their account was bolstered considerably when Podge Doran goaled a ground-shot inside two minutes of the resumption after a neat set up by Seamus Casey off a delivery from Robbie O’Connor (2-5 to 0-4).

But Gorey snapped back with a somewhat fortuitous 34th-minute goal, when a free from Pádraig Doyle rebounded from an upright with Cathal Dunbar quickest to react as he lashed to the net to reduce the gap to 2-5 to 1-4.

However, after a subsequent exchange of points, Naomh Éanna endured a setback when Dunbar was dismissed following an off-the-ball offence, with referee Justin Heffernan acting upon the advice of a linesman from an apparent helmet infraction.

The north county men refused to lose heart though as they dominated the minutes immediately following that blow before applying a blow of their own, when Darragh Hughes launched a 21-yard free straight to the net to cut the margin to 2-7 to 2-6.

And, after ‘keeper Barry Hughes had denied Oylegate’s Podge Doran a goal, Naomh Éanna’s charge gained added momentum as they turned the tables by 2-9 to 2-7 after 50 minutes courtesy of wing-back Jack Cullen, Aodhán Doyle and Pádraig Doyle (free).

But Oylegate-Glenbrien threw the cat back firmly amongst the pigeons when good work on the edge-of-the-square by Podge Doran saw no.5 Ciarán Hourihane flick towards goal where Seamus Casey applied the telling touch as they regained the initiative by 3-7 to 2-9 on 52 minutes.

Parity was re-established on 56 minutes with a pointed free from Pádraig Doyle shortly before the same player edged Gorey back in front from a similar chance (2-11 to 3-7).

But the twists-and-turns seemed unending as Seamus Casey whipped Oylegate-Glenbrien onto the front-foot by 4-7 to 2-11 when completing his hat-trick having being fed by sub Jack Reck.

But Gorey came thundering back as sub William Cullen and Pádraig Doyle (free) pointed before Conor McDonald caught a delivery from Eoin Molloy and shook off a couple of defenders when dancing his way in before booting to the town-end net to euphoric cheers as Naomh Éanna re-took the lead decisively by 3-13 to 4-7.

Star midfielder Aodhán Doyle tagged on a third personal point as Naomh Éanna held out under determined late Oylegate-Glenbrien pressure – including a dangerous goaling effort by Michael Heffernan – to qualify for their historic first-ever appearance in the county senior hurling final after serious progression since winning the intermediate championship in 2015.