Martin Storey U14 Competition 2019: All the Action from another successful Hurling Tournament 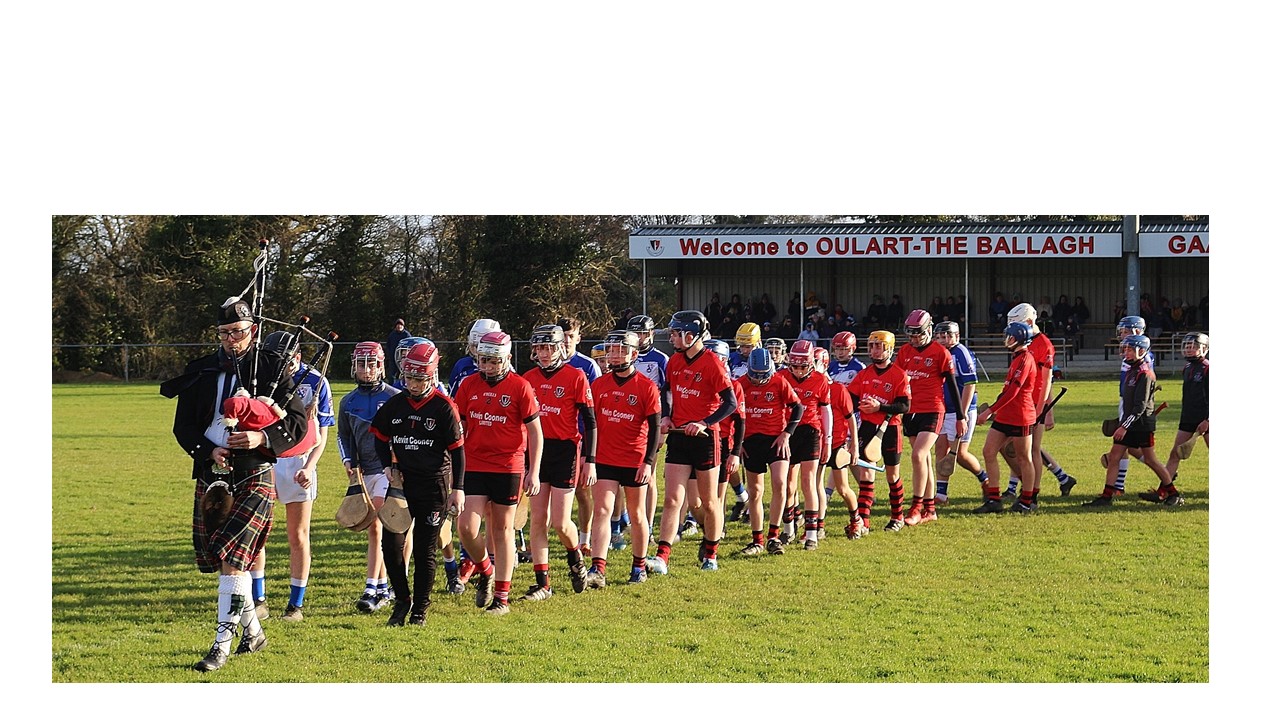 This year was the third year of the Martin Storey U14 Competition, which was started in 2017 and has grown year on year. Wexford C&G and Oulart The Ballagh GAA came together to establish this competition to give boys in the odd/younger year of club competitions a chance of regular games and to continue developing skills at a time of year when sometimes the hurls would be put away. The aim & ethos of this competition is for development and to give all boys a chance to play weekly games with a particular focus on skill development, particpation & fun. Over the past 3 years there has been a huge interest and this year was no different with 22 sides entering the competition in 3 different divisions. Over the past 7 weeks clubs have played regular games every Sunday morning which culminated in 6 teams qualifying for the final of the 3 divisions. Oulart The Ballagh & Wexford GAA are proud to name the competition after one of Wexford’s most famous sons, Martin Storey. Oulart The Ballagh host all 3 finals together in a Festival of Hurling with this year’s games taking place on Sunday December 8th.

In a hugely entertaining game a skillful Monageer Boolavogue needed a fortuitous goal late on to edge a brave and determined Ballyhogue GAA in a tight and tense final. Monageer Boolavogue playing with a strong wind in the first half got a dream start & raced into a 1.2 to nil lead after 10 minutes. However, after this initial surge Ballyhogue grew strongly into the game and start to use the ball well & work it up the field with some lovely combination play. Ballyhogue tagged on the next 3 points in a row to cut the lead to 2 at half time where they would be aided by the strong wind in the second half. However, a hugely motivated and well drilled Monageer Boolavogue brought a huge intensity to the 2nd half and scored 2 great points early to stretch their lead to 4. Ballyhogue showed huge heart and never stopped trying. The men from Bree tagged on some excellent scores to bring the score back to the bare minimum. Late in the game a close in free from Monageer Boolavogue stroke the crossbar and bounced down over the goal line to give them a hugely important 4 point lead. Lots of brave & courageous defending from the Monageer Boolavogue backs held out a string of attacks from Ballyhogue who fought desperately to the end but couldn’t peg back the 4 point deficit. Zack Levingston (Ballyhogue) & Thomas Deacon (Monageer Boolavogue) received their awards as their clubs ‘Most Improved Player’ over the course of the tournament. Everybody at the game wishes Ballyhogue player Ben Asple a speedy recovery after he took a heavy knock in the 2nd half.

The Division 2 final was most definitely the game of the day at this year’s Martin Storey Finals. This game was only decided in the 3rd minute of injury time with a superb last gasp Duffry Rovers point. Two very well coached teams went at it for 60+ minutes and the game ebbed & flowed right to the final whistle. Glynn Barntown got a superb start & raced into a 5 point lead after 12 minutes, 1.2 to no score. However, a Duffry Rovers team who would show huge heart throughout battled back to level the game after 23 minutes. Another goal from the Killurin men sent them into a 3 point lead at half time. Duffry Rovers playing a lovely brand of hurling got their noses in front with 5 minutes to play, 2.2. to 1.6. This Glynn Barntown team was not to lie down though and buried a 21 yard free with 58 minutes on the clock. This looked like it was going to be the winning score. However, the Blackstairs boys summoned up an incredible last 4 minutes to score 2 unanswered points to sneak in front by the bare minimum. Another 2 minutes of frantic hurling played out before referee David O’Leary blew the final whistle much the joy of the huge Duffry support. Cillian Hanrahan (Duffry Rovers) & Paul Denton (Glynn Barntown) received the ‘Most Improved Player’ award for the respective sides. A delighted Duffry Rovers team collected their well earned shield off Martin Storey to huge roars of joy from their supporters.

The old saying of ‘goals win games’ was never more true than in the Martin Storey Cup final between Oulart The Ballagh & Oylegate Glenbrien. Oylegate Glenbrien were excellently prepared, always trying to work the ball out and took some fantastic scores throughout the game. However, they were unfortunate to face a razor sharp and red hot Oulart The Ballagh team who had already won the Wexford Feile na Gael earlier this year. Every time the Oulart forwards got on a ball they caused huge amounts of panic in the Oylegate defence and seemed to take every chance that came their way. After a close and tense first 10 minutes Oulart The Ballagh began to show their skill and class and they dominated the scoreboard up to half time going in with a 5-4 to 3 points lead having played with the aid of the stiff breeze. To Oylegate Glenbrien’s credit they never gave up and battled right to the bitter end. Oulart The Ballagh manager Philip Rossiter must be delighted with how unselfish his players were throughout, always giving the ball the player in the better position. On the other sideline Oylegate Glenbrien manager Graham Rowley will be massively proud of his sides spirit & heart. His players always kept trying to play a lovely brand of hurling even when chasing the game and took some classy team scores throughout. Peter Wickham (Oulart The Ballagh) & TJ Frost (Oylegate Glenbrien) were worthy recipents of the Most Improved Player award. Oulart The Ballagh legend Martin Storey was delighted to present the Division 1 trophy to his own club mate Georgie Kelly. This was Oulart The Ballagh’s first victory in the Division 1 of this competition having previously won the Division 2 title in 2017. This Oulart The Ballagh side is a serious team to be watched over the coming years. They are a panel of players with huge skill levels, burning pace and a killer instinct. Well done to both sides on their commitment and development over the course of the past 7 weeks.