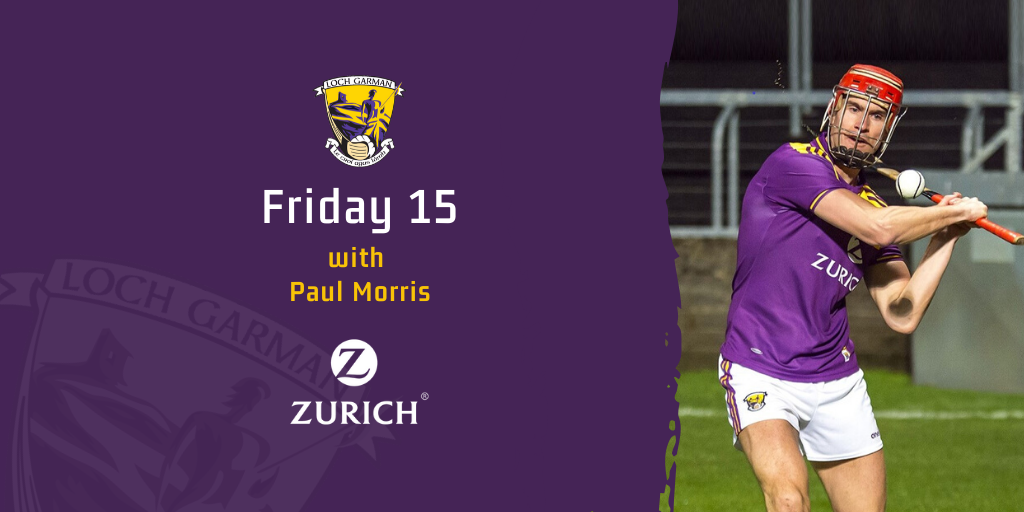 1. Who was your Hurling hero growing up?
I didn’t really have any one particular hero growing up, anyone playing for Wexford at the time were my hurling heros. I really looked up to the 1996 Wexford Team, especially guys like Liam Dune, Larry Murphy & Martin Storey. Outside of Wexford I was always a big fan of the O’ Connor brothers from Cork.

2. What is your most memorable sporting moment as a player or supporter?
As a player it has to be the Leinster final 2019, it’s been a hell of a long road getting that first medal and doing it in Croke Park there really is no better place. Times go by in your career where you question will you ever get up the Hogan Stand steps to lift silverware & it just makes all the suffering worthwhile. As a supporter the Leinster semi-final 2004 was unreal, Mick Jacob rattling the net and Brian Cody down on his knees at the back of the goal – Great days.

3. What athlete do you admire in another sport outside the GAA and why?
Dan Carter former All Blacks out half. I’m not even a huge Rugby fan but for some reason I’ve always followed him and loved watching him play. His kicking off his left was a joy to watch and it’s just so clear how dedicated he was to perfecting his kicking style. Always delivered on the big occasions too.

4. What are the basic skills that young players should focus on?
First touch, it can never actually be good enough and you can never stop working at it. A quality first touch at inter-county level is the difference between having that extra half second to settle vs the ball been snapped away. Even now with the current lock-down it’s back to basics and I’m at the wall 2-3 times every day. My neighbour actually got onto me recently that I was making too much noise hurling late at night and their baby was trying to sleep!!

5. Best advice for young Hurling players?
Have a top-class attitude and treat your teammates and managers with the same respect. There is nothing better than seeing a really talented underage player but to have a genuine good attitude to go along with the talent is more important. Don’t always just go for a puck around, go and spend time practising areas relevant to where you play in games.

6. What advice would you give to parents of young Hurling players?
Don’t push them along or force them into it. Let them find their own path, as players develop at all different ages in terms of interest in hurling and ability. Give them the encouragement needed but in general it’s great for them getting used to dealing with the ups and downs you experience during sport.

7. Tell us about your senior debut for Wexford?
I made by debut in 2010 vs Galway in Nowlan Park. It was naturally a proud moment for me and my family as the goal was always to play and win with Wexford. Colm Bonnar was the manager at the time, I had been showing good form in training so got introduced as a second half substitute. Surprisingly there was no nerves, just pure excitement to get on to the pitch. Unfortunately Galway beat us convincingly that day.

8. What is your most memorable game for your club?
In terms of occasion it would be the 2013 county final. Unfortunately Oulart beat us on the day by two points but as a club player the goal is always to get to and win a county final. We went behind by 8-9 points early in the first half but we showed great desire to pull it back level with minutes to go and unlucky not to win. County finals are a special day and what every player dreams of.

9. How do you balance your GAA and Work/Study commitments?
Be organised and plan in advance. The demands on inter-county players have never been higher and ensuring your food in particular is planned the day before is key. It’s important to switch off at times too and just relax – This year I started doing gym work occasionally in the morning which frees up more evenings to chill out.

10. What is the most prized jersey in your collection?
2019 Leinster Final jersey. I still have it in the gear press at home but some day I’ll get around to getting it framed and hopefully I’ll be bringing another few jerseys in with it by then too.

11. What is the first Wexford Championship match you remember attending?
I vaguely remember the 2001 All Ireland Hurling Semi Final replay against Tipperary where Liam Dunne and Brian O’Meara both got red cards. I was playing actually table tennis in Mosney that weekend and my Dad picked me up to bring me to Croker – Miserable wet day and a sickening defeat.

12. Who is the biggest influence on your career and why?
My parents and in particular my father Joe. He coached me for a lot of my underage along with Seamie Murphy and Pat Byrne who were both fantastic servants to Ferns GAA. My father was always a constant support of encouragement for me growing up but at the same time always kept me level headed. If I ever looked like getting ahead of myself, I was always pulled back into line petty quick which you only really understand why when you get a bit older.

During my school days at FCJ Bunclody, Rory Kinsella was a great coach and around this period Tom Dempsey & Liam Dunne were quite influential. Tom & Liam were over our Wexford minor hurling team which forms a large part of today’s Wexford senior hurling squad. Over the past 3-4 years Davy Fitz for the change of mindset he brought to me and a totally new perspective on how the game of hurling can be played.

13. Who is your unsung hero in the GAA?
Dominic Murphy is a Ferns St Aidans club man who has done untold work over the years. He would drive people mad at committee meetings, but his heart is always in the right place. In general it’s the people on the ground at your GAA club who are the heartbeat for the whole organisation.

14. What book would you recommend reading?
I’m not a huge book reader but have just purchased 3 to start getting more into it, one of those is ‘Shoe Dog’ about the founder of Nike so I am looking forward to reading this. ‘Outliers’ by Malcom Gladwell is a good read about the story of success.

15. When preparing for a game, what is your healthy breakfast choice?
My go to breakfast is a bowl of porridge followed by a second breakfast consisting of scrambled eggs, turkey sausages, beans and a slice brown bread. Nice mixture of Carbohydrates and Protein to fuel up nicely.