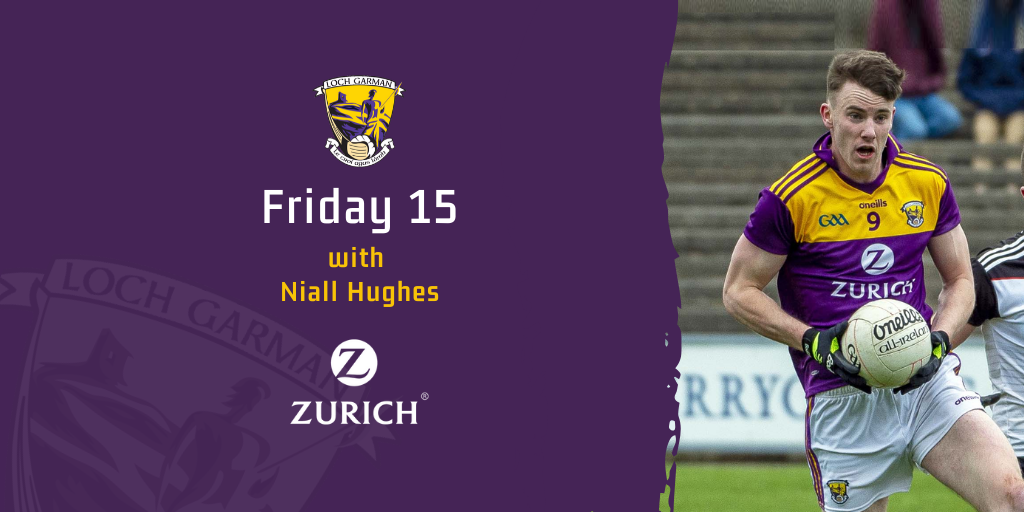 1. Who was your Football hero growing up?
My own clubman Matty Forde is someone I always looked up and still do. His outstanding commitment to both club and county is to be admired, he was at the peak of his powers when I was growing up.
Outside of Wexford I idolised Mayo’s Ciaran McDonald, he had a wand of a left foot.

2. What is your most memorable sporting moment as a player or supporter?
It would have to be the 2008 championship game against Meath where Wexford were 10 points down at half time. I remember a distinct moment in the game where Graham Geraghty had just scored Meath’s second goal and their supporters telling us it was time for us go back home to Wexford! Thankfully, we didn’t listen to them.

3. What athlete do you admire in another sport outside the GAA and why?
Tiger Woods, he was on top of his game for such a long time! Had a major career setback due to personal and health issues, a lot of people said his career was over. He came back to win the 2019 masters, his never give up attitude and work ethic to get back is something to be admired. The ultimate GOAT!!

4. What are the basic skills that young players should focus on?
To be comfortable playing off both feet when it comes to kicking, soloing. Hand passing off both hands. Two sided players are much more comfortable on the ball therefore rarely get caught in possession.

5. Best advice for young Football players?
To enjoy playing the game, respect all teammates and managers. To pay particular attention to the areas they may feel weak on – it will be hard at first but the rewards from doing so will be valuable. Practice practice practice!!!!

6. What advice would you give to parents of young Football players?
To encourage their kids, set a good example, help them develop by practising with them and most importantly let the children make the decision on what they want to do.

7. Tell us about your senior debut for Wexford?
It was in 2015, an O’Byrne cup game against IT Carlow, I started wing forward and scored 2 points from play. I remember going into school the next day being absolutely delighted with myself.

8. What is your most memorable game for your club?
It would be the 2017 Intermediate county final against Bunclody, we won by 2 points after extra time. It was a bizarre game to be involved in, we were a good few points up in the second half where we had a side-line around 30 yards out from our own goal, our wing back Richard Hughes decided to make the game more interesting by half kicking the ball straight to a Bunclody player which resulted in them scoring a goal. Richard was never allowed to take a side-line again!

On an individual note, it would be the 2018 Senior County Final, ended up scoring 1-3 from play off Eoghan Nolan from midfield with a pulled hamstring. Shelmaliers went onto the win the replay against us with ease but there was no sign of Eoghan out midfield as he hid in the full forward line.

9. How do you balance your GAA and Work/Study commitments?
By being able to plan my week. I know what nights I will be training so I just plan to do my college work on the nights I am off. Communication with management is important if I ever feel under pressure. I try to be as productive as possible with the time I have.

10. What is the most prized jersey in your collection?
I have a Vodafone All Star Jersey signed by 2004 Football all-star team, the likes of Paul Galvin (look where he is now) Colm Cooper, Ciaran McDonald & Sean Cavanagh signed the jersey.

11. What is the first Wexford Championship match you remember attending?
The first championship game I remember attending was the 2004 Leinster Hurling semi-final in Croke Park where Michael Jacob scored that famous last-minute goal to beat Kilkenny. The roar from the Wexford supporters when that goal went in is something I will never forget, mad scenes.

12. Who is the biggest influence on your career and why?
It would have to be my parents, I was the only person from Kilanerin at my age playing on Wexford Development squads, my mother would drive the length of the county just to bring me training.
My father then too, he was my club manager from u10s all the way up to minor. He gave me my u10 debut when I was five years of age, the mother wasn’t too pleased with him. We struggled with numbers all the way up through my underage career, he would drive out of his way to pick lads up and would reward them for playing just so we had enough players to play matches.
I used to attend Kilanerin senior training from a very young age where I would kick balls back to the players from behind the goal, the team was very successful at the time and inspired me to try emulate them when I was old enough to do so.

13. Who is your unsung hero in the GAA?
Supporters, underage coaches, and anyone else who gives up their time for the good of the GAA.

14. What Sports Documentary would you recommend watching?
Jimmy’s Winning matches- a great documentary on Donegal’s All Ireland win back in 2012. You can watch it on YouTube.

15. When preparing for a game, what is your healthy breakfast choice?
I keep it simple with a bowl of porridge with some banana and honey along with a cup of tea to wash it down!