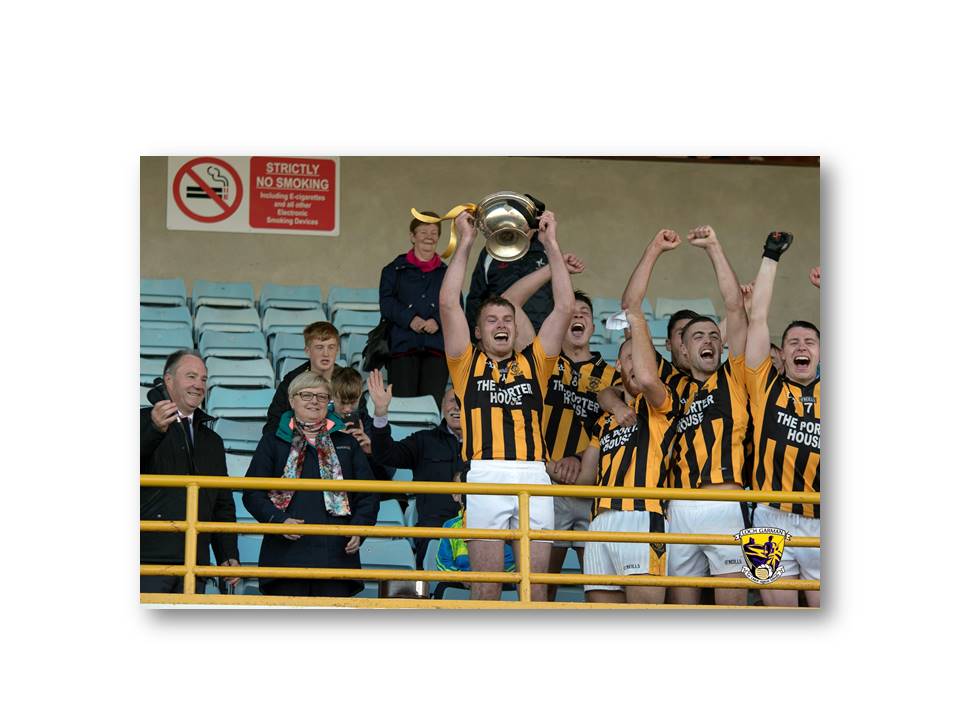 Shelmaliers are celebrating breaking-through to the county senior football championship roll-of-honour after a commanding victory over Kilanerin in Saturday’s replayed final at sunny Innovate Wexford Park.

Goals at the start of either half were key to the Over-the-Water men achieving their dream some eleven years after rising from intermediate ranks, and four years after they annexed their first-ever county senior hurling title, after a replayed final in 2014.

Simon Donohoe, their saviour from the drawn game six days earlier, gave the Over-the-Water men a dream start when goaling after just 63 seconds, and after forging clear by 1-6 to 0-1 at half-time, AJ Lehane pounced to find the Kilanerin net inside a minute of the re-start as Benny McCabe’s Shels soared towards an historic result.

Kilanerin were left living off scraps such was Shelmaliers’ dominance as this rematch failed to lift up to the exhilarating highs of the deadlocked duel.

Shelmaliers enjoyed first advantage of the wind, and they stormed through for Simon Donohoe to find the town-end net after 63 seconds following a neat set up by ‘man of the match’ Eoghan Nolan.

The eventual winners had stars throughout the field, including full-back James Cash, who demonstrated a real zest to make amends for his disappointing dismissal in the drawn game as the full-back mounted numerous purposeful forays up-field.

A number of positional alterations from the drawn tie – including Brian Malone’s switch from midfield to centre-back – contributed to Shelmaliers’ greater control of matters, and while Eoghan Nolan and Matty Forde (free) traded points, the black-and-amber were already looking convincing when stretching 1-4 to 0-1 ahead after 18 minutes as AJ Lehane (2) and Eoghan Nolan added to their burgeoning tally.

But they fired four wides during a subsequent eleven-minute scoring impasse before brilliant captain Eoin Doyle got them back on target in the 29th-minute, and after AJ Lehane made it 1-6 to 0-1, Simon Donohoe went close to netting a second personal goal just before the break.

Regardless, the Kilanerin net was rattling again just 40 seconds after the resumption, when AJ Lehane was at the business end of a swift move (2-6 to 0-1).

Craig McCabe extended the gap to 12 points with a pointed free before Peter Hughes ended Kilanerin’s famine when cutting the gap to 2-7 to 0-2 on 35 minutes.

But Simon Donohoe and Brian Malone points kept Shelmaliers soaring towards their much desired destiny before teenager Ross Banville had them in heaven as he planted their third goal in the 40th-minute from a pass by Conor Hearne (3-9 to 0-3).

Craig McCabe was unfortunate not to get amongst the goals moments later, but Conor Hearne sent Eoghan Nolan haring through to goal and blow open a 4-10 to 0-3 margin after 45 minutes.

Niall Hughes and Matty Forde pegged back points for hard-trying Kilanerin, and after Shelmaliers’ sub Jody Donohoe and colleague Glen Malone responded with points, the north county men gained the consolation of a goal, when Matty Forde powered home a penalty won by Niall Hughes.

Forde and sub Bobby Hughes lofted closing points for Pat Forde’s valiant outfit as Kilanerin dreams of following in the footsteps of their colleagues from 1974 and 1993 – becoming senior champions immediately after winning intermediate – were denied by a near exemplary execution of their replay plan (bar their wides) by Shelmaliers’ euphoric heroes.